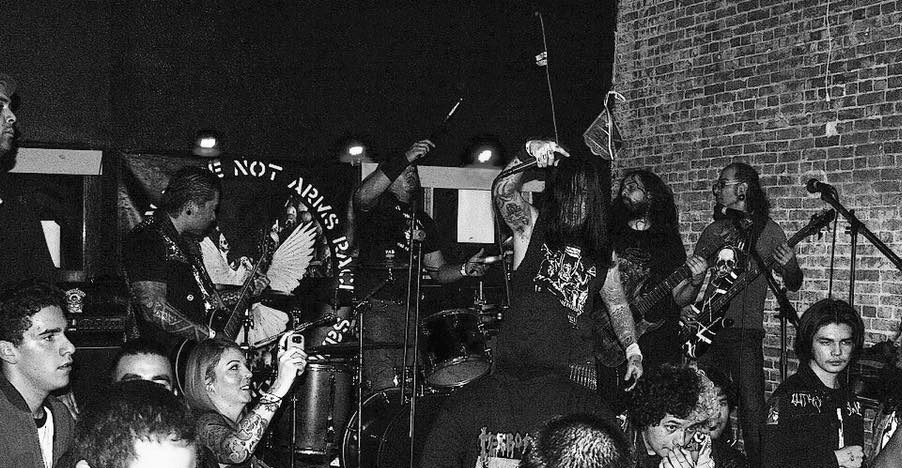 The Apocalypse was formed during the height of the Reagan-Era Cold War. Widespread nuclear fear and political deceit provided fuel for the bands’ furious blend of Motor-Charged Punk Rock; combining equal parts Crucifix and Crass with Bathory and HellHammer – this lethal collision of influences gave birth to their filthy brand of StenchCore. The Apocalypse consisted of Brothers Rich & Christ (git and vox), low-end purveyor Johnny V. and Mark H. providing the bestial beats.

The bands’ self-titled demo was a politically charged, angst-ridden, anarcho-treatise; the perfect soundtrack to George Orwells’ bleak, dystopian novel 1984…the year of the bands’ genesis.

Throughout the decade, the band terrorized the fertile Los Angeles and Orange County scenes, blurring the lines between the distinct metal and punk factions. They created harsh mindscapes with their monolithic riffs and subversive artwork. Unfortunately, youthful folly and misunderstanding led the core-four to part ways, but the brothers revamped the band with a new rhythm section consisting of Phil M. on skins and Shawn B. on bass. A second guitarist was added as well – John P. from the almighty A//Solution contributed more than his share of caustic chords. The final piece of the puzzle came with the addition of Nichole, a second vocalist that helped balance Christs’ rage and rasp!

The first release in ‘89 was a noisy piece of vinyl entitled Earth – a body-battering display of blackened riffs and punk ethos. It was followed by a filthy split ep with TRANSGRESSION on Desperate Attempt in ‘90 and, finally, a doom-laden piece of vinyl-despair in the form of a split with the insidious MINDROT in 1991. They were also featured on a Maximum Rock n’ Roll “peace-punk” comp entitled “They Don’t Get Paid, They Don’t Get Laid, But Boy Do They Work Hard”. In 1998, Half-Life records released a blistering re-packaging of all their recorded material on CD entitled “Coldbringer”.

They set out on an aural assault of the US in 1990 (dubbing it the Earth Grind Tour) where they played along side CrustCore contemporaries like Nausea (NY), Misery, Destroy! and the sludge-supreme Winter. Shortly after their return to Los Angeles, strained friendships from touring ended the band. The Apocalypse was no more.

Armed with a renewed fervor – the brothers resurrected the band and are joined by some incredibly talented and dedicated musicians. Shan from the mighty Scarred For Life drops the 4 string doom with Robden, from Fuck White God, slaughtering the skins and Joey punishing the low-down 7 strings!!

The Apocalypse have just recorded three songs for an upcoming split with the legendary Extinction Of Mankind to be released in early 2017 with more aural madness to come!!