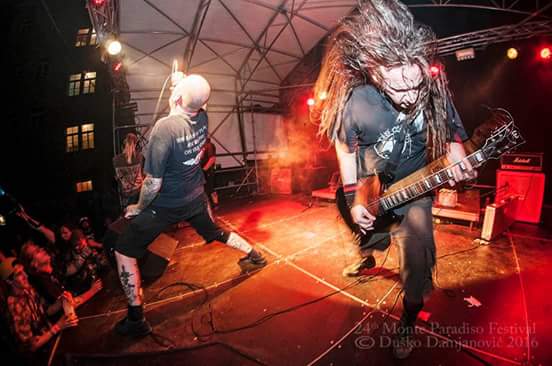 Bio:
Formed in 1992 the original line up consisted of Ste (vocals), Mass (Guitar), Fozzy (Bass), Foz (Drums) With plenty of practices and gigs under their belt, their first split EP with Warcollapse was released at the end of 1993 The next split EP with Doom was released in 1994. The Weakness EP was also released in 1994 and a tour of Europe with Doom was undertaken. After the tour Fozzy left the band to be replaced by Ginny on bass duties, and work on the Baptised in Shit album began. The album recorded, the band set out on another tour of Europe with Warcollapse in 1995 and the album was released during this tour. 1996 saw another tour of Europe this time with Misery, with Marvin(Varukers) playing bass during this tour due to family commitments for Ginny. Around this time a plan to release a split album with Misery surfaced, and did that ever take a long time to happen! Early 1998 saw the recording of the Scars of Mankind EP. Around this time Foz left the band to be replaced by Tony on the drums Then a tour of the UK and Scotland with Wolfpack. After this tour it was decided to go the two guitarist route bringing in Scoot (ex Largactil,Doom,HK), but things didn’t work out and Mass left leaving Scoot sole guitar duties. 1999 and a tour of Sweden and Norway with Wolfpack and Skit System was the bands next outing The end of 1999 saw both EOM and Misery in the studio to record their split album Apocalyptic Crust, finally. 2000 and a tour of the west coast of the US with Misery was undertaken, although no sign of the album being put out. 2001 and after lots of chasing about and confusion, 2 years after recording, the album finally comes out, on CD and 2 different 12in vinyl’s A return to the US to do the east coast and Canada again with Misery brings the year to an end. 2002 the Ale to England EP comes out, this being 3 years after recording, (songs recorded during the Apocalyptic Crust sessions) 2003 no tours a few UK dates with Bomb Blast Men. The band go into the studio to record their second full length album, hopefully out in the new year. Is 8 Years in between albums a long time?. 2004-recorded The Nightmare Seconds… released on cd by us & vinyl by Profane Existence. Featured in issue 27 of Terrorizer mag.Gigs w Avskum,Broken Bones,Bait,Forca Macabra.Euro tour. EOM played the Profane 15th anniversery bash w Misery,Provoked,Disrespect,Ass & Blackout in Minneapolis. 2005-gigs around the UK including benefits for Stig (icons of filth) & Wayne doom) who both sadly passed away, 3 gigs in finland w the mighty forca macabra, riistetyt & unkind, recorded 2 trax for comps. 2010 saw the split 12″ with PHOBIA (usa) released by AGIPUNK, EOM toured Japan with Disgust from nagoya & released a split cd too. 2011 ginny had a heart attack that put the band on hold, a few gigs done in 2012 & Ginny left late 2012 due to health issues. Tony also left as his job demanded more commitment. Here we are 2013 with a new line up with Chris on bass & Callum on drums, currently writing the new lp. Ste & Scoot talked about knocking EOM on the head but we believed there is still life in the old crusty dog yet…….