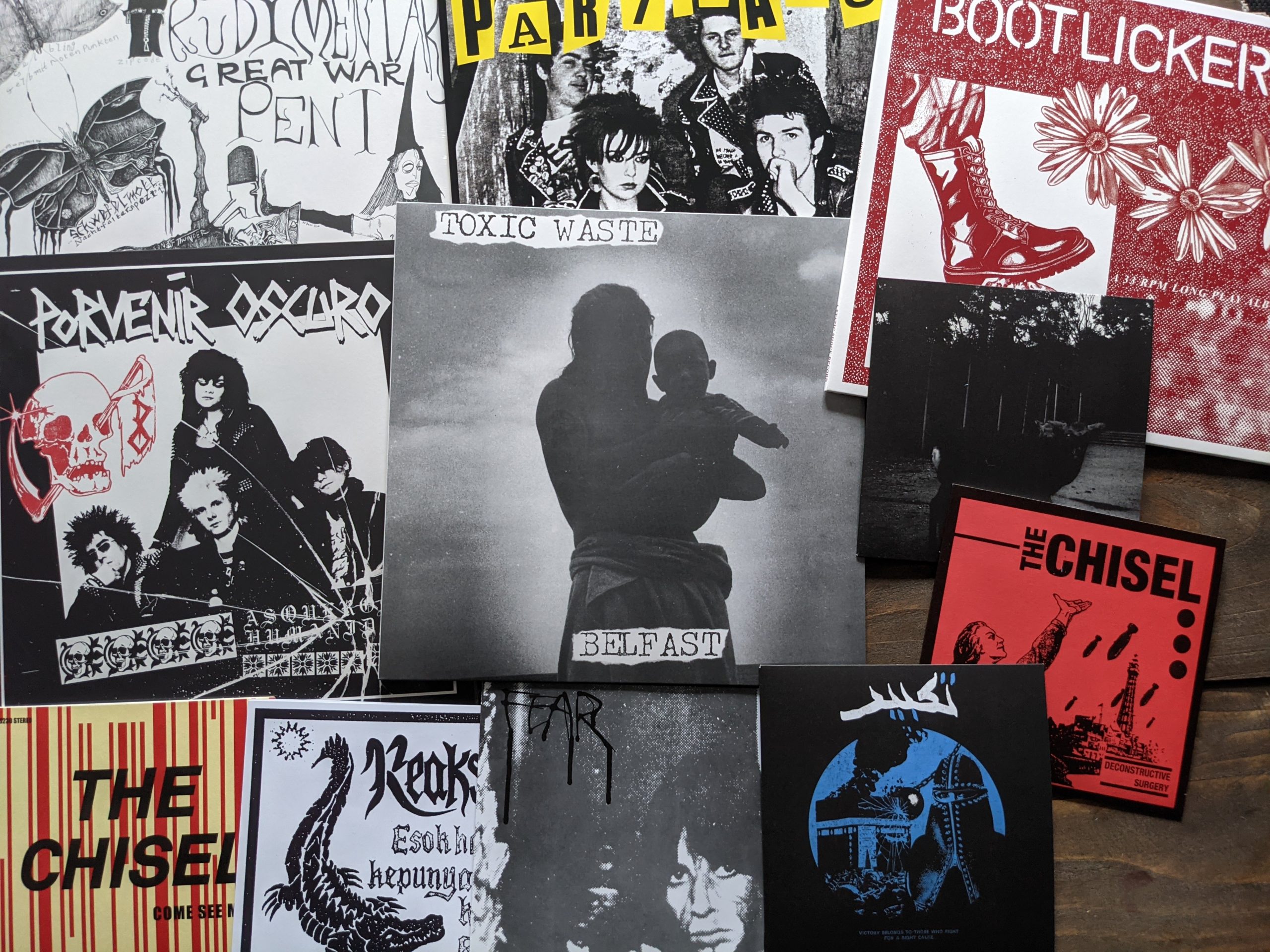 One record I and I hope many of you who have been waiting to be reissued is Toxic Waste – Belfast LP. TOXIC WASTE represent the hardest end of the CRASS milieu. “Belfast” was originally released in 1987 on Vocalist Roy Wallace’s Belfast Records and has been out of print for 30 years. It was a compilation of previously released tracks and newly recorded versions of old tracks with Dino and Gary from D.I.R.T doing the female vocal parts and guitars. The 12 tracks on “Belfast” are nuggets of raging pissed off DIY anarcho punk with hard hitting lyrics and dual vocals. TAQBIR – VICTORY BELONGS TO THOSE WHO FIGHT FOR A RIGHT CAUSE 7″ Released via bandcamp and YouTube this enigmatic recording turned many heads and got many people speculating about this absolute rager of Moroccan origin. Four short vomits of anti-religious sentiment made music. PORVENIR OSCURO –  ASQUEROSA HUMANIDAD LP Made up of 13 tracks “Asquerosa Humanidad” doesn’t let the foot off the gas for a second. It is relentless pogo inducing attack that falls somewhere between FERTIL MISERIA, RIP and early CHAOS UK. THE PARTISANS ANARCHY IN ALKATRAZ / NO FUTURE DEMOS 1980 – 1982 LP The first side of the LP has 10 tracks recorded in April 1980 in one day and like bands in their early years – it features mainly covers. It includes songs from the Sex Pistols, Stiff Little Fingers, UK Subs, Buzzcocks, UK Subs, Cockney Rejects and yes even more UK Subs. Lots more Partisans tracks rawer and more punk than the actual well know versions plus 28 Page Booklet. RUDIMENTARY PENI GREAT WAR MLP Recorded several years ago before Rudimentary Peni engaged in another mysterious hiatus, Great War has finally emerged to kiss the gas-tinged light of a mustered morn. Great War cements new phase in the ever-crawling metamorphic madness that is Rudimentary Peni. SIAL – ZAMAN EDAN 7″ Singapore SIAL return with two songs of bleak mechanised feedback laden punk. BOOTLICKER – S/T 12″ Following four EP’s and two demos, their self-titled debut stays true to the noise cultivated in the previous offerings. That raw, blown-out production countered with clean guitar sound and Internationally-informed take on a UK82 delivery remains. THE CHISEL DECONSTRUCTIVE SURGERY 7″ & COME SEE ME/ NOT THE ONLY ONE EP Explosive new music from The Chisel bringing the edifying and restorative powers of the great British folk tradition back to the table for a staggering next pint. REAKSI – ESOK HARI KEPUNYAAN KITA EP 7″ from Melbourne Australia are three immigrant punks from Malaysia, Indonesia and Singapore  this debut five track E.P combines the solid attack of UK 82 of THE PARTISANS, CHAOS U.K, the anthemic Oi! sound of THE 4SKINS, BLITZ