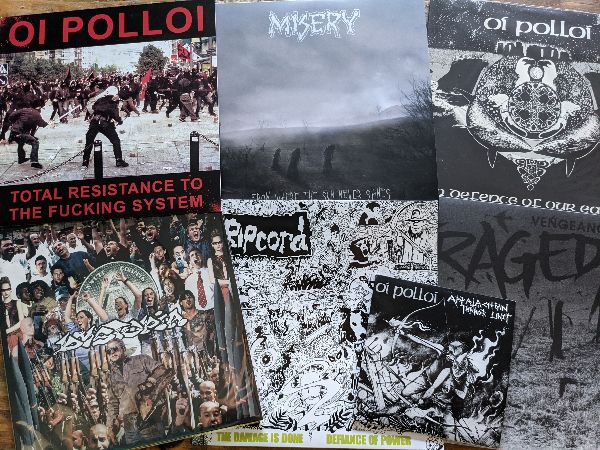 New Arrivals includes MISERY don’t really need an introduction do they? Along with NAUSEA and APOCALYPSE they spearheaded the American crust-punk scene since the late eighties. Reissue of this crucial crust-punk semi classic from 2012 unleashing 14 tracks of frantic bulldozer crust punk including two covers from the AMEBIX and NEW MODEL ARMY. Got a few Oi Polloi releases in as well they should need no introduction TOTAL RESISTANCE TO THE FUCKING SYSTEM LP although these songs were all originally recorded at the same time, they were released separately – either on various compilations or on the “Let The Boots Do The Talking” and “Carson?” 7′ EPs now all on a green vinyl 12″. Also arrived back in ‘In Defense of The Earth’ all the classic tracks such as “Anarcho Pie”, “Nazi Scum”, “When two men kiss”, “Worldpark Antartica”, “Free the Hence” and so on. Oi Polloi split 7″ with Appalanachian Terror Unit Scottish Oi Polloi delivers tracks in Gaelic, Finnish (!) and English (for a change). ATU tracks boil with energy of anarcho crust.  Also in again Tragedy – Vengenance and Dystopia – S/T 12″ I keep having to restock these and if you don’t know why maybe check them out.