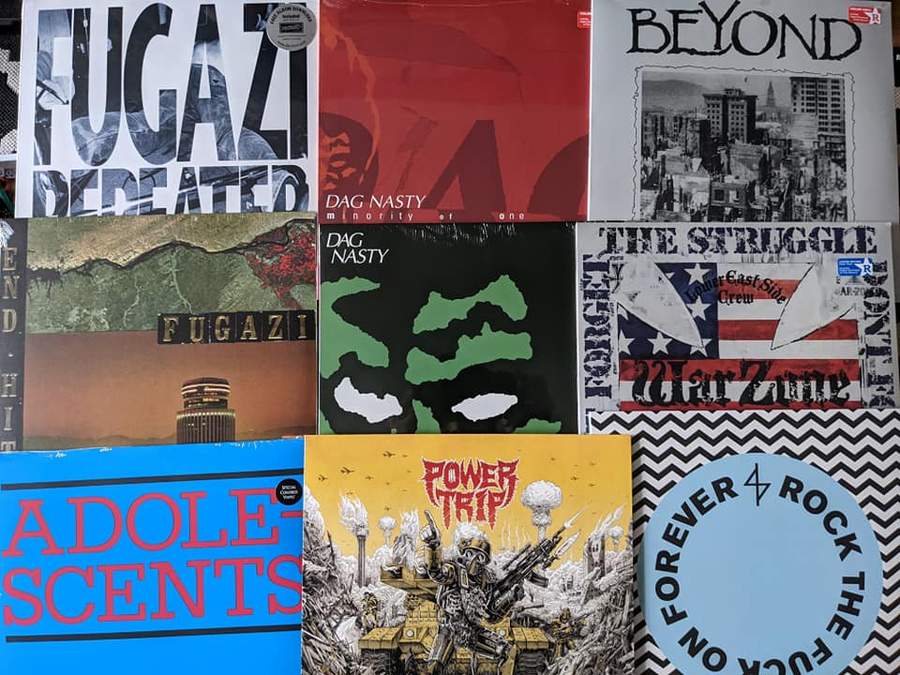 Some new additions a couple of restocks: First off POWER TRIP “OPENING FIRE: 2008-2014” a complete collection of Power Trip’s earliest, non-LP output. Adolescents – S/T 12″ One of Orange County’s first punk bands in all their glory. This classic album is full of ’80s punk “hits”, First album in 12 years Descendents – “Hypercaffium Spazzinate” is back in stock.  ANGEL DUST – ROCK THE FUCK ON FOREVER LP blissed-out, melodic punk/hardcore that brings together the worlds of Lemonheads and Bad Brains like nobody before them has, personally the band I have listened to the most in the last 12 months. Got in Fugazi – Repeater and End Hits 12″s into distro dont need to say much about them also off Dischord Dag Nasty ‘Can I Say’ and from Revelation Dag Nasty’s which was there 2002 return LP. Restock of DISCHARGE “HEAR NOTHING SEE NOTHING SAY NOTHING” I think they are some hipster D-Beat band from Stoke-on-Trent check them out they do a good job. Also got in a bunch of Revelation Records recent reissues and represses including Long Island metal-tinged hardcore BEYOND – NO LONGER AT EASE, IGNITE – CALL ON MY BROTHERS LP, FARSIDE “THE MONROE DOCTRINE” a mixture of late-’80s post-hardcore (Dag Nasty, Husker Du and the Descendents were big influences) and NYHC Warzone “DON’T FORGET THE STRUGGLE, DON’T FORGET THE STREETS” latest reissue. And not recently reissued or repress but still damn good CHAIN OF STRENGTH – THE ONE THING THAT STILL HOLDS TRUE LP a 10 ton truck – merging the guitar sound of Minor Threat with the crunch of bands such as the Cro-Mags and melding it with an intensity that gained notoriety from coast to coast.
Also got a restock of some essential Irish punk THE STEAM PIG – DEEP FRIED OBEDIENCE 12″ after selling out of the copies we had last year.